The true botanical origin of the tea plant is still a matter of speculation however it is widely accepted that the parent plant came from China and spread to the Indian region of Assam and with more than 4,500 years of tradition, China is generally regarded as the country in which tea originated from.

It was only in 1823 that some wild growing tea plants were discovered in Assam, in north-east India, and subsequently cultivated. Tea growing on a truly commercial scale was pioneered by the British in the state of Assam after the discovery of the tea plant by Major Robert Bruce. Over the years, through scientific research and field trials, the plants have been developed for optimum quality, yield, pest and drought resistance.

The various aspects of tea cultivation: 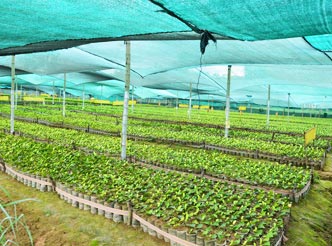 Nurseries Over the years, the process of planting tea has evolved greatly. Fifty years ago young plants were raised from tea seeds, harvested from mature tea bushes left to fulfil their natural life cycle and growing up to 30ft in height. However today, the most common practice for cultivating the next generation of tea bushes is to take cuttings from selected 'mother' bushes and raising these in dedicated nursery beds. 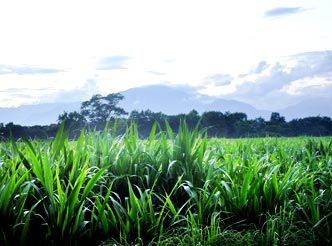 Land Preparation Before planting of young tea bushes can begin, the piece of ground, commonly known as a 'Section', requires careful preparation. This is, in fact, one of the most crucial steps in the tea cultivation process as the carefully prepared area must provide the plants with the best possible start to their lives, so ensuring that the best quality tea is grown.

Bush Husbandry It takes approximately four years for a section to be ready for plucking and be commercially viable. To ensure that every young plant achieves its optimum shape, regular pruning and bush husbandry gently establishes the plant's frame.

The mature plants are pruned in every 3 or 4 years and the best time for pruning in Assam is in December once the main growing period is over and the bushes have been given time to build-up starch reserves. These starch reserves play an important part in the bush's ability to sprout new growth, weather permitting, in the early part of the following year. Pruning in other regions of the world are different, however, the same principles should be followed so that before the bushes are cut down they are left alone to build up their starch reserves, so enabling a prompt recovery and early flushing of new growth.

Uprooting & Replanting In the late 80's McLeod Russel identified, through various studies, that to be sustainable into the future every estate would need tea plants that were no older than 60 years old, our studies had found that plants over this age become less productive.

McLeod Russel was the first Indian company to initiate a long-term Uprooting & Replanting Program at the start of the 90's as a part of its sustainable agricultural practices. The Company observed that to optimise tea output (Yield) of a section, the age of the bush was a critical factor.

Through careful planning and management we have, for more nearly four decades, maintained our leading Industry position for yields and quality standards and as a result, have made a positive contribution towards the future of tea in the region. It is with great satisfaction that we see the rest of the Indian tea industry following our lead and initiating sustainable replanting programs, so securing the future for the people of the North Eastern region of India.

Soil Management Soil management is an integral part of our land management ethos and focuses on differences in soil types and soil characteristics to determine specific actions.

At certain times in the year, India experiences heavy amounts of rain and specifically during the Monsoons period from June through to September. To ensure that the plants are not waterlogged or flooded, 'drainage' ditches are cut into each section to channel the excess water out of the area. These ditches also ensure that as little top soil as possible is swept into the tributaries and hence reduce the silting of the region's main rivers.

A member of the Williamson Magor Group